The recent implosion of the Surgisphere data papers has been big news. It included one that purported to show no benefit (and actual harm) from hydroxychloroquine treatment, and even more harm when combined with azithromycin – but since the authors have been unable to back up the raw data on this, the paper cannot be taken as valid.

This has some people thinking that there is therefor no case against using HCQ, and indeed, that the case against it has collapsed. Keep in mind, though, that even before the Lancet paper the evidence for it as a useful coronavirus treatment was thin and equivocal. And it’s been noted by many in the last few days that there are well-controlled trials underway with hydroxychloroquine, whose data will read out and tell us a lot more.

Well, one of them has. The RECOVERY trial is a large effort in the UK to evaluate several potential therapies, and today its organizers announced results from an evaluation of the hydroxychloroquine treatment arm: 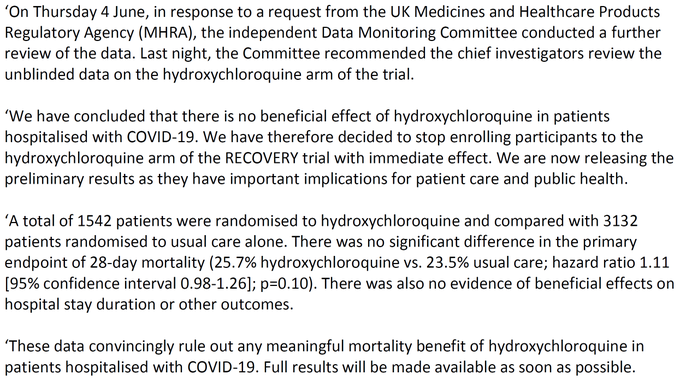 And there, I think, we have it. Martin Landray of Oxford, a leader of the trial, told Reuters “This is not a treatment for COVID-19. It doesn’t work” I think I agree with him. And no, I don’t think that there is a sudden switchover to efficacy when zinc is added, but you know what? We’ll be getting trial data on that idea, too. Unless there is some dramatic news, a possibility that I would not put money on, I do not plan to revisit the topic of hydroxychloroquine on this site. There are too many other more worthwhile things to talk about. I’ll update this post if needed, but that’s probably going to be it.

234 comments on “The RECOVERY Trial Reports on Hydroxychloroquine”

This site uses Akismet to reduce spam. Learn how your comment data is processed.

© 2021 American Association for the Advancement of Science. All rights Reserved. AAAS is a partner of HINARI, AGORA, OARE, CHORUS, CLOCKSS, CrossRef and COUNTER.